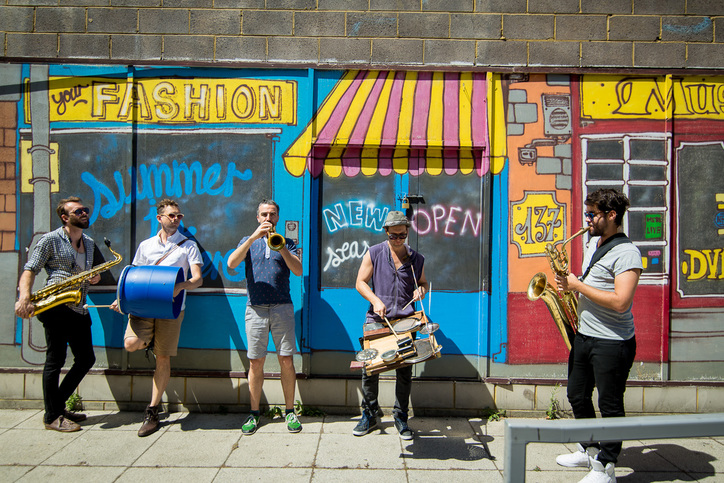 The Crusty Suitcase Band brings forth the ancient sound of horns and drums in a new light for all audiences. Playing gangster hip-hop to soulful dub, gypsy swing, funk and afro beat. Their unique sound is driven by Ben Walsh’s high energy and masterful drumming as he supports the power of 5 incredible horn players led by Matt Ottignon. From the bass resonance of the massive sousaphone to the intricate melodies of the clarinet, all frequencies are covered. Think string quintet but in brass!

The CSB produce a wall of sound that inspires an audience and commands a frenetic dance floor. Performing compositions written by composer BEN WALSH, this is not your typical 'seated performance' ensemble, but a dance act in its own right!

They were the highly aclaimed live stage band with Australian circus show SCOTCH & SODA between 2013 - 2015.
Touring the United Kingdom and Australia extensively during that time, here's what the critics had to say ....

"... yes, you can dance to it. In fact, it'll take all your strength not to. This is music that'll see your mojo rising..." - AUSTRALIAN STAGE

"...The Crusty Suitcase Band, a group of some of the ﬁnest musicians in the country bring together the
fabric of what makes the elaborate tricks and tumbles work. This group is not just a band, they are an
integral part of the show."  - ALL ABOUT ENTERTAINMENT

​​"Musically, they were flawless but the most impressive element of the band’s performance was their characterisation. The living, circular- breathing, troupe brought so much colour and character to the stage that there was simply never a dull moment" - HECKLER
Powered by