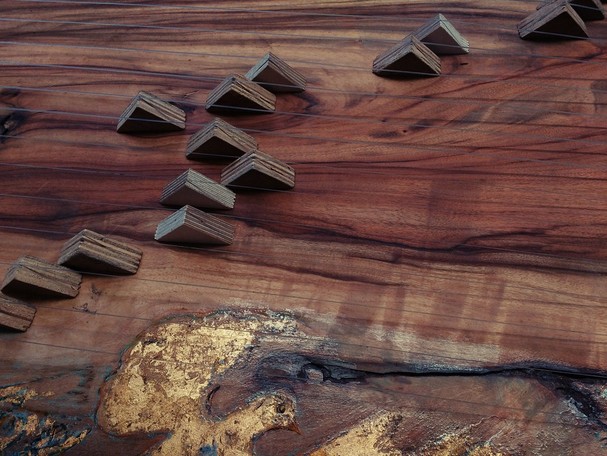 Named as it sounds, somewhere between the Persian and Indian Santoor, and the Japanese Koto...
The KOTOOR is unique and delicate, a new instrument with a very ancient sound..
A landscape of moving bridges allows the kotoor to be easily tuned to any scale, its strings Nylon rather than animal hyde or steel wound.
The wood a non native camphor laural Tree grown in the Byron Hinterland.
Its wood grain an artwork in itself, and unlike many acoustic instruments the zither like  structure has no resonation to the ear.
But a pickup on the body takes the vibration through the bridges and into the PA or Amplifier.
This allows the Kotoor to be recorded and Amplified without feedback or external noise to be captured.
For such a delicate instrument this is a constant problem! But the kotoor is made to be played at any location.
Created to play alongside his friend in arms Bobby Singh on the Indian Tabla, the Kotoor has been featured on many albums already.
Hear it below!
BACK
Powered by